Presenting a thorough overview of bit-interleaved coded modulation (BICM), this book introduces the tools for the analysis and design of BICM transceivers. It explains in details the functioning principles of BICM and proposes a refined probabilistic modeling of the reliability metrics—the so-called L-values—which are at the core of the BICM receivers. Alternatives for transceiver design based on these models are then studied.

Providing new insights into the analysis of BICM, this book is unique in its approach, providing a general framework for analysis and design, focusing on communication theoretic aspects of BICM transceivers. It adopts a tutorial approach, explains the problems in simple terms with the aid of multiple examples and case studies, and provides solutions using accessible mathematical tools.

The book will be an excellent resource for researchers in academia and industry: graduate students, academics, development engineers, and R & D managers. 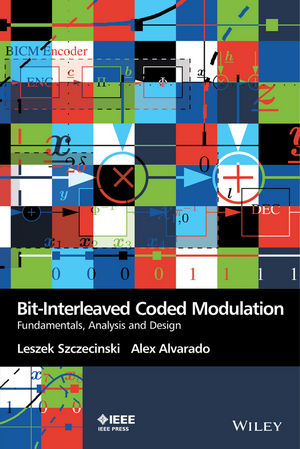 We would like to express our gratitude to those who, in one way or another, helped us to get through with this project. First of all, our sincere thanks go to those who motivated us to start and continue this work. In particular to Jacob Benesty (Institut National de la Recherche Scientifique, Canada) who provided inspiration to start this work and continuously encouraged us along the way. We also thank Lajos Hanzo (University of Southampton, UK) whose friendly advice pushed us into this adventure.

We would also like to thank Wiley’s staff: Mr Mark Hammond, Ms Suzan Barclay, and Ms Liz Wingett who were extremely patient with us during the project.

Last but not least, our thanks go to different funding institutions which, over the years, financially supported our work. This includes the British Academy and The Royal Society, UK (under the Newton International Fellowship scheme), the European Community’s Seventh’s Framework Programme (under FP7/2007-2013 grants #271986 and #236068), the Swedish Research Council (under research grant #2006-5599), the Department of Signals and Systems, Chalmers University of Technology (under the Solveig and Karl G. Eliasson Memorial Fund), the European Commission (under projects NEWCOM++ #216715), the Comisión Nacional de Ciencia y Tecnología, Chile (under research grant PBCT-ACT-11⁄2004), the Natural Sciences and Engineering Research Council of Canada, and the Fonds québécois de la recherche sur la nature et les technologies, Quebec, Canada.

If you have found other typos or errors, please send an email to leszek “at” emt.inrs.ca. Any other comments about the book are of course also welcome.